DMTN-082: On accessing EFD data in the Science Platform

This document discusses how data from the Engineering Facilities Database and the Large File Annex can be most effectively made available to Science Platform users.

The EFD (Engineering Facilities Database) is a system developed by LSST Telescope and Site that consists of an SQL database as well as the Large File Annex, which is a repository of binary data such as images from the all-sky camera.

In this document, we will use EFD to refer to the D (database) part, and the Large File Annex that is part of the EFD system shall be explicitly referenced as such.

The EFD is populated from information published to the service abstraction layer (SAL); that includes telemetry for all sensors and devices on the summit, as well as other information that Telescope and Site need to store, such as the (planned) night observer’s log.

The EFD contains data that is of interest to users of DM systems and services, including the commmissioning team, the science validation team and the science pipelines team. This data is most useful when co-analysed or co-monitored with data derived by the science pipelines. This informal technote discusses an alternative proposal to the baselined plan for servicing these users.

The Science Platform is intended to support free-form troubleshooting for the Commissioning and Science Validation teams, so detailing an exhaustive list of usecases is difficult. As long as data from the EFD is exposed in good time and in good form to the Science Platform, we expect to be able to service a large portion of both the anticipated and unanticipated use cases.

Following are some example investigations we expect to be representative of core activities users of the Science Platform will undertake:

The health dashboard may have some of these quantities, but it will not be configurable the same way a custom dashboard could be. A concrete example of this usage is a scenario where the commissioning scientist wants to modify the set point of the focalplane temperature controller. They then want to trigger wavefront observations at intervals as the system returns to equilibrium to monitor how the system responds to such stimuli.

We did engage in conversation with members of the T&S team to confirm that there are not requirements on the health dasboards that would satisfy use cases stated here, specifically alerts and trend analysis will not be supported by that system.

There are a number of motivators for exposing EFD data to DM tools and services:

Engineering staff and the commissioning team are excited and motivated to use DM tooling, however when they discuss their usecases low latencies in exposing facility information to the tooling is a strong presumption.

The raw EFD is optimised for the high frequency writes that are expected from a telemetry database. The intent has been to have a separate database, derived from data in the raw EFD, in the LDF for use by the Data Release Production pipelines.

The baseline design involves an ETL (extract-transform-load) process from the “raw” EFD to the retransformed EFD. In the original design the periodicity of EFD data being available in the retransformed EFD was set to once every 24 hours. Shorter periods such as one hour have been discussed, with the possibility going down to 5 minutes having been discussed, but not demonstrated as feasible with this architecture.

In this design, any calibration or aggregation is done during the ETL process. One of the primary purposes of aggregation is to allow the aggregation and association of values with the exposure table. For example in the event that three months into the first year a quantity that is not in the header is identified as required by the Science Pipelines, it would be added in the header configuration and be availale for alert production; however the DRP that runs on that whole first year will need to pull that information for the first 3 months from the DM/ETL EFD. The Calibration Database is also populated from data in the DM/ETL EFD.

There are a number of concerns about the baselined design.

Rather than going through an ETL process, we propose a solution that uses a direct tap off the Base EFD writers. Such a solution would handle the streaming, caching and aggregation to a DM-specific telemetry database, which we call the DM-EFD. This solution can meet the proposed latency requirements and has a weaker coupling between the highly controlled EFD schema and the more rapidly evolving DM services, instead of a schema-schema transform.

A technology in use elsewhere in the project (for alert distribution) is Kafka (https://kafka.apache.org/). Kafka can handle streaming, caching and aggregation out of the box, so may prove to be a very good fit for the system proposed here. Whether aggregation is handled before publishing to a Kafka-like system or within the system itself should be demonstrated when benchmarks for publishing streams of the richness expected from the SAL are available.

Additionally we propose that DM-EFD hold only telemetry data and events, and that data originating from human comments (eg shiftlog and data quality remarks) be segregated in separate tooling and databases, in order to optimize user-friendly interfaces (eg. Slack) and multi-platform broadcasts (eg. a message goes both in a database and echoed on Slack).

Both of these would require LCRs and possibly the reallocation of resources. 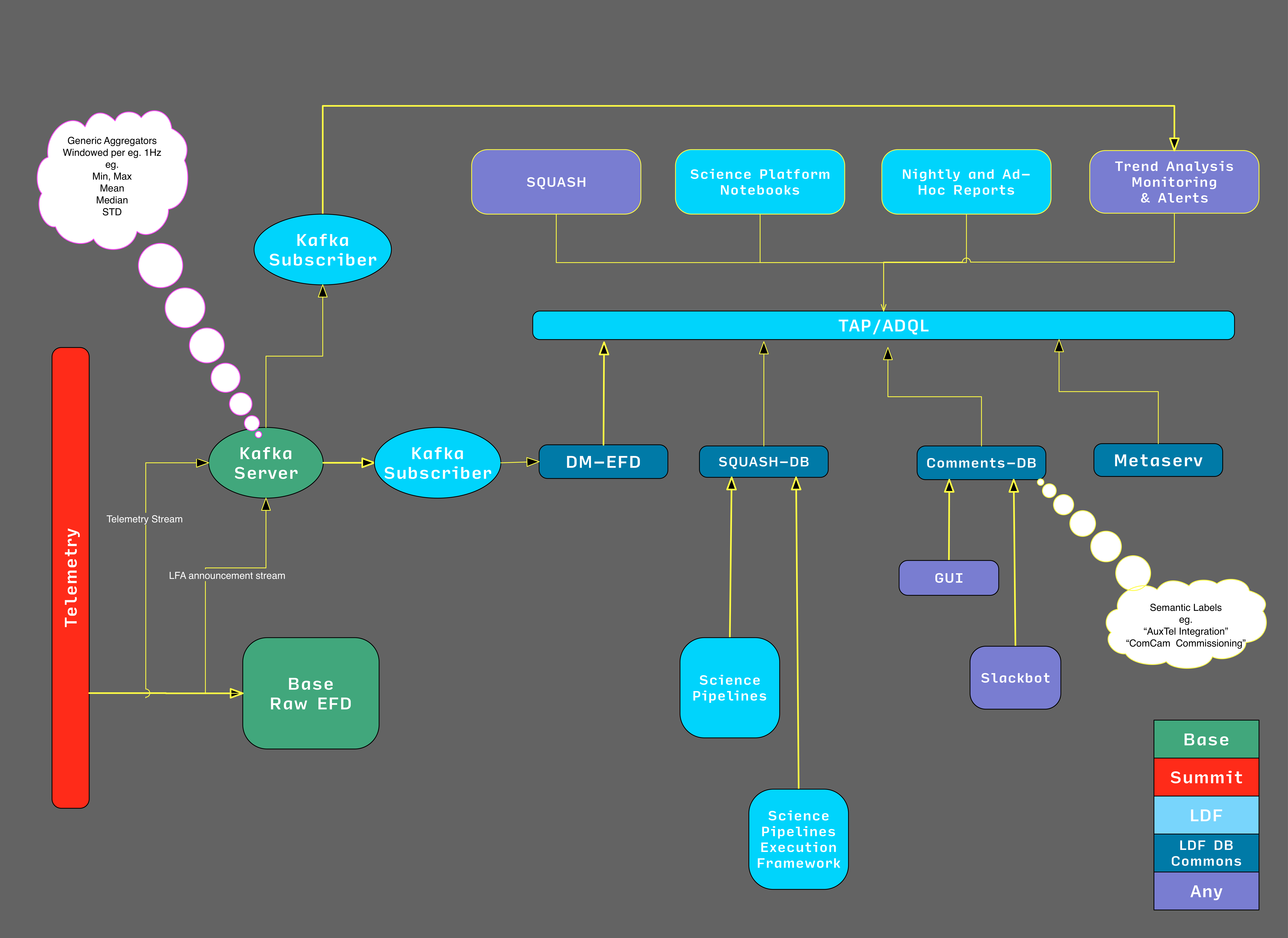 In the EFD design there is a SAL client that monitors the DDS bus and uses writers to insert telemetry values into the EFD, write them in logs etc. It is a lightweight change to add a writer to publish these values to Kafka. Kafka can both deal with caching and connection management, as well as aggregation.

Another advantage of switching to a streaming model is that this matches well off-the-shelf observability and trend analysis products (eg. https://www.honeycomb.io/).

As well as the Telementry stream, the EFD captures Event Streams and Command Streams. Although these streams are of potential interest to the Science Platform users for troubleshooting purposes, they are analogous to log messages - informational rather than quantitative. Therefore we propose that Event and Command streams are treated as Telemetry insofar that they are forwarded by Kafka to be be stored in the DM-EFD for querying, but there is no aggegation necessary.

By volume, most of the information in the LFA is of no interest to Science Platform users, nor is it in a form that is tractable for python-level exploitation. For example, the LFA contains reports in the form of Excel spreadsheets; a Science Platform user is likely to create reports from the data directly, rather than interact with the derived documents.

Data of interest in the LFA originates from:

Like the data from the Auxillary Telescope, users want to interact with the LFA data through the butler, an appropriate dataset type having been define. Moreover users require these data with very low latencies as it is likely that they need it in order to make on-the-fly adjustments to systems during commissioning.

We therefore propose that the LFA Announcement Stream is monitored by a service running at the base. The Archiver is a likely candidate, but could also be a new service specifically for this purpose (See LDM-152 [1] to see how the Archiver fits into the overall middleware architecture.) and when data from these enumerated sources is made available, that it be injected into the data backbone, from whence it will be treated like data (and not telemetry) by upstream services.

Regardless of whether the ETL or new proposed architecture is adopted, the eventual architecture needs to show how it can meet satisfy the following requirments and use cases.

If, as anticipated, DM tooling is the primary of interface to EFD data for anyone beyond hardware-level engineers, availability of those services will be important to operational staff in Chile and the US, as well as to science users. It is therefore a requirement that the entire architecture is structured so that sandbox deployments, rolling upgrades and carefully coordinated downtime are the norm for routine operations.

Data should be available via TAP/ADQL services as other data sources available to the Science Platform.

The interface to the Science Platform should be deployment- and time-invariant: the same notebook accessing EFD data should run without modifications on the day in Chile and a month later at the LDF.

A syntactic sugar to make access to EFD data more pythonic from the notebook (and to shield the user from schema implementation details) has been requested. Here is an example of how a notebook user could obtain statistics on the M1/M3 temperature sensors:

The purpose of aggregation is both to reduce volume on high-frequency telemetry data and to increase the signal-to-noise of busy telemetry. Science Platform users are generally interested in events at the same order of cadence as a camera exposure; therefore we propose that all telemetry data sampled with a frequency higher than 1Hz is (1) sampled at 1Hz and (2) aggregated to 1Hz using these generic statistics:

For command streams, no aggregation should be done.

For event streams we propose that using Kafka we sum repeats of the same messages within the 1Hz window (eg if the M1M3 subsystem issues a limitError even 100 times in the last second, a repeat counter of 100 is stored with the event).

Latency should be addressed in two parts:

DM-EFD should be sized to hold the aggregated event streams from commissioning to the end if operations. It should be redundant, or backed up so that the risk of data loss is acceptably low, even if the EFD system is backed some other way into cold storage.

Any system needs to be robust against summit-base network outages, and cache, automatically reconnect and recover any data accumulated during the interruption.

Note that in the baseline design, this recovery rests in the ETL process being able to detect backlogged data inserted in the base raw EFD. In the proposed modification, this data will be transparently picked up by the Kafka publisher when the base raw EFD writers catch up with the backlog. It is also possible that in the event where sufficient resources are available to deploy the Kafka publisher at the summit, this problem would be immediately mitigated, without depending on whatever scheme is used to keep the base EFD in sync with the summit EFD.

A notebook examining data should be deployment invariant within LSST operations; i.e. the same notebook should work in a Science Platform deployment at the LDF and one at the Base.